Zoe ambushed me while I was trying to rehearse for the show in Washington Park with MotherJudge. So we started a little freestyling. No real words, just nonsense to support the melody. Cool for a while, but by the time I turned the recorder on to capture it, she was practically on to the next thing… as you can hear.

The next day, Zoe left for a week-long trip to New York City with Grandma, Uncle Jason and Aunt Veronica.

Originally I thought this song might be about the drummer on the new record, Cleopatra Jones, as an antagonist to Jennifer. Cleo gets a brief mention in the first song on the record, “Muse.”

Note that this was written before the band – pulled together at the last minute after a desperate call to Jennifer – had actually flown in to help with the record and I was under the mistaken impression that Cleo was a drummer. Ooops! 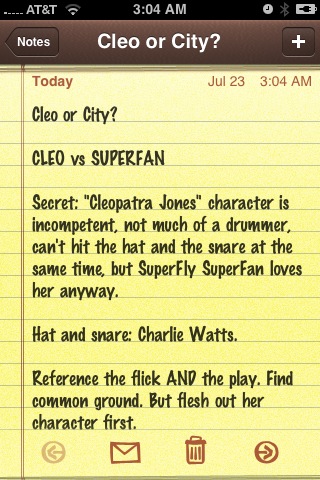 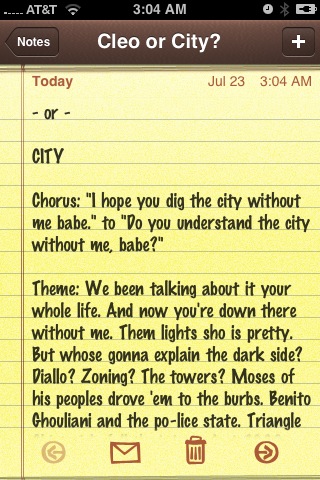 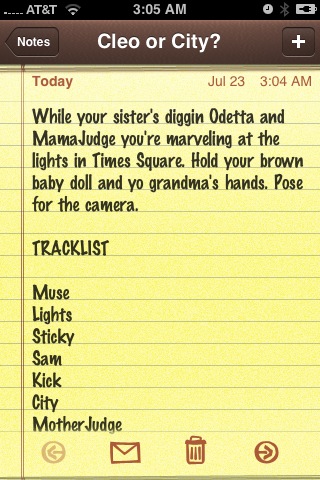 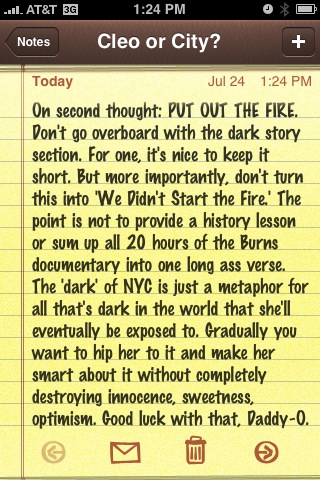 1. VERSE: Baby Maya digs MotherJudge and Odetta.
2. CHORUS: But you’re down in NYC. Without me.
3. VERSE: I could take you down to Broadway. Passing Strange/Stew offers better lessons than Camp Rock any day. Grab a mic and a cap and follow me if you can. Story of daddy’s life – and yours before you’ve even lived it. Lived it. Visit. Dig it.
4. CHORUS: How you in NYC without me?
5. BRIDGE: City never sleeps but it sure gets dark. [QUICK SOLO? CHORUS CHORDS? Maybe needed to break up all the damn singing. Allows performer and listener to catch a break from the last verse with ALL ITS DAMN WORDS.]
6. EXTENDED VERSE: Dark stories in NYC history.
7. CHORUS: I hope you dig the city without me, babe. I KNOW you’ll dig the city without me, babe. YEAH: Keep it as positive as possible after coming out of the dark verse.

We could have taken in a Broadway show as part of your visit
“Passing Strange,” I know you’d dig it
It’s your Daddy’s life story – and yours
Before you’ve even lived it 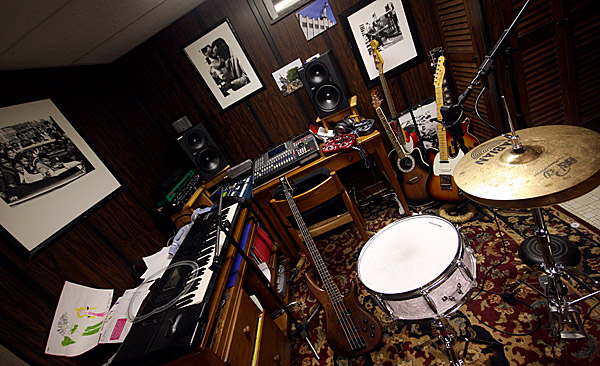